The Metamorphosis of CHM and the Rattle Snake tittle-tattle 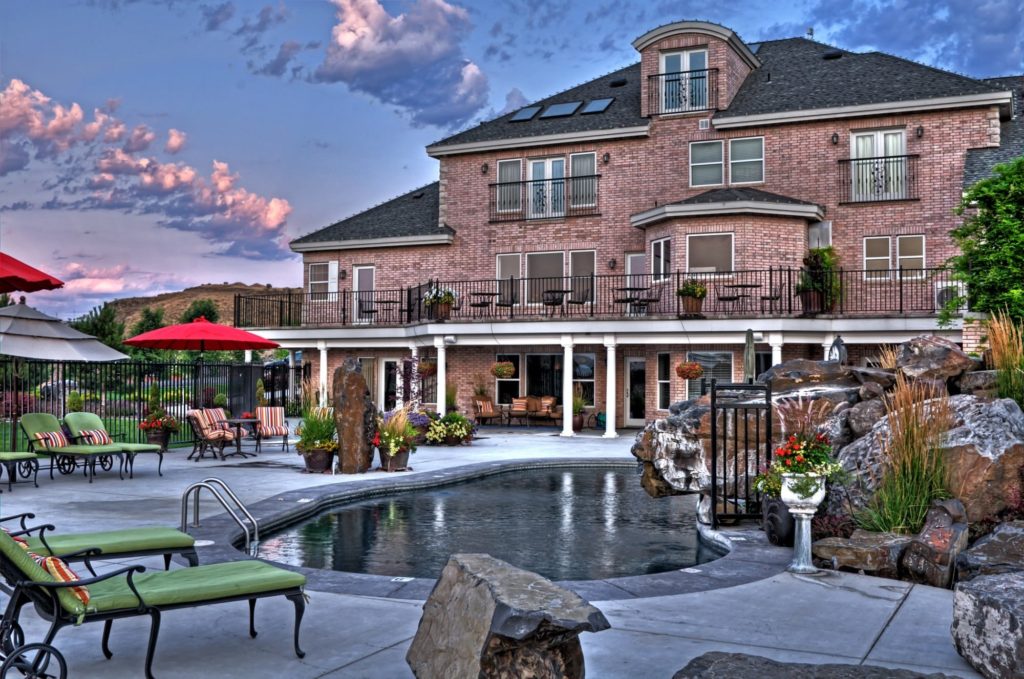 So before I tell you about the rattle snakes, let me begin the story of Cameo Heights Mansion in 1996 when Alan and Deanne Fielding moved with their seven children to a bluff overlooking the Walla Walla River to carve an orchard out of the craggy slopes. Drilling a well was the first order of business. Simultaneously, earth movers chiseled broad sections for planting out of rock outcroppings and sagebrush. Bare-rooted fruit trees, 127,000 in number, were planted side-by-side into straight rows. Piles and piles of white irrigation pipe were sawed and glued. The family lived in a fifth wheel trailer, rising each sunrise to a full day’s work.

Four months of anxious well drilling ensued before water was found 1275 feet below the basalt. Joyous was the day when a beautiful warm flow of 88 degree water gushed out of the deep hole.

Alan mounted a caterpillar one morning and on top of a picturesque plateau overlooking the Walla Walla River valley, dug out a hole in the ground and the Mansion was born. Under the direction of Dan Cox, a talented architect / contractor, concrete footings and foundation followed and the expert framer, Lynn Stanfield, started the construction of walls and floors. One afternoon, Deanne approached the construction zone to find a large diamond back rattlesnake hiding from the sun on the floor of the lowest level of the house. Recognizing his territorial dominance, she retreated only to find him out of sight the next day. She casually mentioned her encounter with the rattler to the local postmistress, Liz Rambo.

Meanwhile serious financial challenges associated with the establishment of the new orchard emerged in August. This set back resulted in the need to close down the house construction. After completing the exterior walls and roof, sealing up the house with windows and doors, and the placement of brick on the full exterior, the work on the Mansion was put on temporary hold–or so they thought. It turned out that the mansion lay slumbering for over a decade.

As work on the mansion came grinding to a halt, local rumors surged. Undoubtedly initiated by the reported story of Deanne’s single rattle snake encounter, the gossip grew with unabashed embellishment as it was nourished by the void of any ongoing construction activity. The high profile position of the partially-completed mansion perched over the beautiful river valley stirred much hearsay. So over time, the rattlesnake tittle-tattle escalated to the level of an urban legend, some versions of which even chronicled the alleged visit of an Australian maverick, a neo-Crocodile Dundee. As the tale goes, he was flown in all the way from the outback to extricate the nasty rattlesnake nests from the infested walls once and for all. When even he was unable to do so, all construction remained on permanent standby–the poor owners having no other recourse, or so the rumor spread.

Meanwhile as the rattlesnake rumor spread like wild fire, so did the Fielding children. College, church missions and marriages soon left Alan and Deanne empty nesters but still possessing title to an uncompleted and uninhabitable mansion.

Fast forward to 2006, (though time was anything but fast-forwarding) and you find Alan & Deanne have begun considering a possible future for the Mansion. The Fieldings were never afraid of hard work and given their flair for entertaining, Deanne’s enjoyment for good cooking, and an eagerness to share their beautiful home and valley, they contemplated the option of building it into a luxury bed and breakfast. Capitalizing upon the concept of creating a romantic retreat for couples, the vision of Cameo Heights Mansion was spawned. Construction was resumed in December 2006 and finished in December of 2007. Named after Deanne’s favorite apple, Cameo Heights Mansion features seven internationally themed suites unique in their unusual attention to detail and all provided with pampered service in a warm and friendly atmosphere. The latest addition to the Mansion is their on-site restaurant service for guests, complete with a professional chef, Nathan Carlson. While a fitting dinner appetizer at “The Vine” would be fried rattlesnake, alas (maybe “fortunately” is a better description) the owners have found it hard to locate a regular supply!

Below see some photos of the “Before and After”:

If you would like to see more photos, click on this link:  Photos of Cameo Heights Mansion.

PrevPreviousCameo Heights Mansion | Luxury for the Cheapskate and Miser
NextFood: The Best Part of Your StayNext

Did you get engaged or know of someone who did recently?  Cameo Heights Mansion is a wonderful place for a wedding.

See Our Packages
Return To The Vine Fine Dining